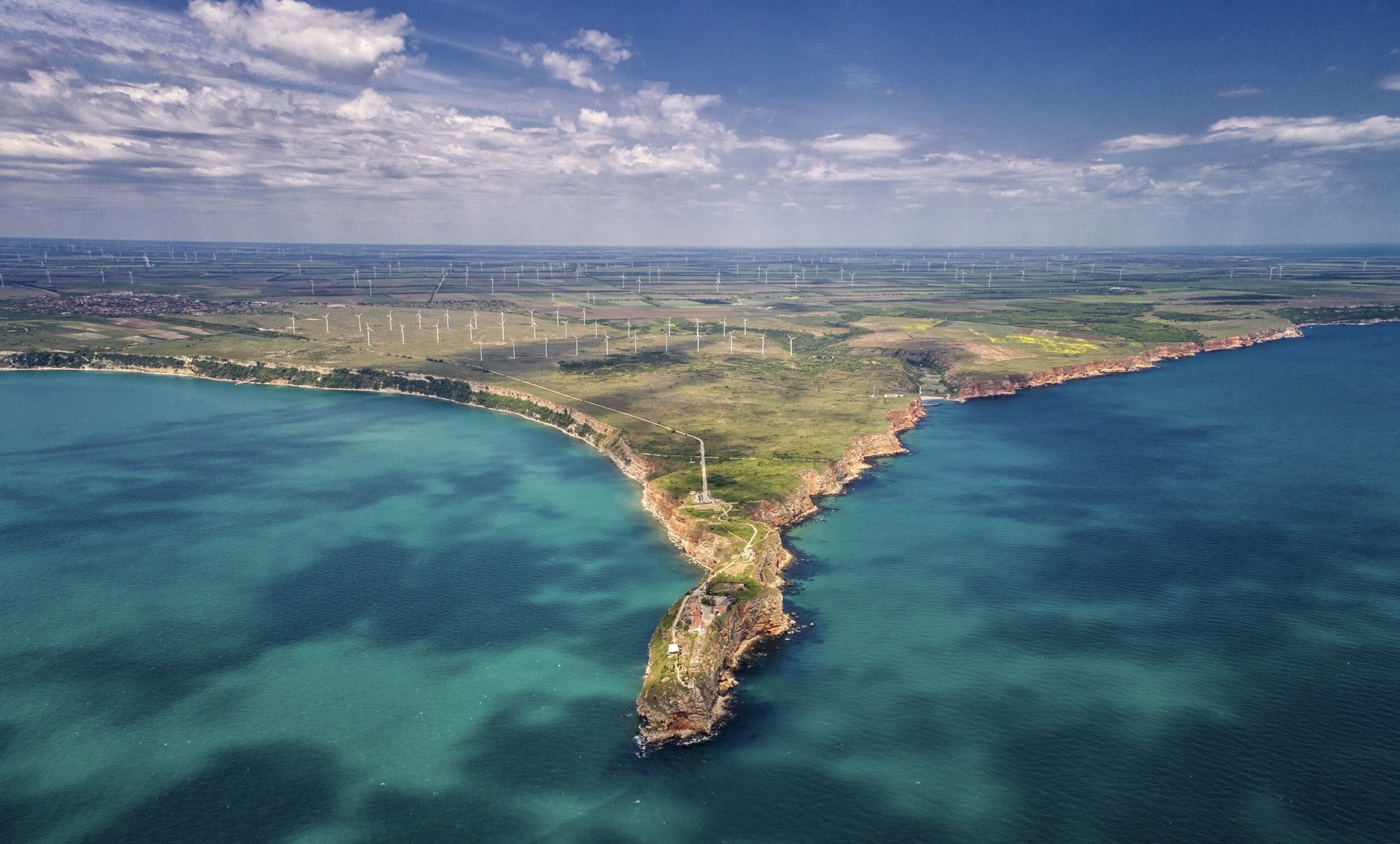 Kaliakra is a long and narrow headland in the Southern Dobruja region of the northern Bulgarian Black Sea Coast, 12 kilometres (7 mi) east of Kavarna, 60 kilometres (37 mi) northeast of Varna and 65 kilometres (40 mi) southwest of Mangalia.

The coast is steep with vertical cliffs reaching 70 metres (230 ft) down to the sea. Kaliakra is a nature reserve, where dolphins and cormorants can be observed. It sits on the Via Pontica, a major bird migration route from Africa into Eastern and Northern Europe. Many rare and migrant birds can be seen here in spring and autumn and, like much of this coastline, is home to several rare breeding birds (e.g. pied wheatear and a local race of European shag). The rest of the reserve also has unusual breeding birds; saker falcon, lesser grey shrike and a host of others.

It also features the remnants of the fortified walls, water-main, baths and residence of Despot Dobrotitsa in the short-lived Despotate of Dobruja's medieval capital. The Bolata Cove with a small sheltered beach lies just north at the mouth of a picturesque canyon, also part of the nature reserve.

The first modern lighthouse on Kaliakra was built in 1866 by the Compagnie des Phares de l’Empire Ottoman; the present one, a 10-metre (33 ft) cylindrical stone masonry tower with lantern and gallery, was erected in 1901, with focal plane height of 68 metres (223 ft) and a white flash (every 5 seconds); it also has a radio navigation emitter and a foghorn.

Near Kaliakra, there is a large mediumwave broadcasting facility, which never went into service as planned. As of 2009, several wind power facilities are under development in the vicinity. The area now has three championship golf courses designed by the legendary golfers Gary Player and Ian Woosnam.

The earliest naval settlement dates back to the 4th century BC, when the area was inhabited by the Thracian tribe of Tiris and who gave the area its original name of Tirisis.

The ancient geographer Strabo, describing Kaliakra, stated that the capital of King Lisimachus, one of Alexander's generals and ruler of Thrace, was located here. According to rumor, he hid in the caves near the peninsula his innumerable treasure, reputedly captured on the campaigns against Persia. In the Hellenistic era, a second fortress wall was built inland, and in Roman times the Thracian fortress was expanded. In the years 341–342, round towers were completed, and there was already a city built up around the fortress. In the second half of the 4th century, a third fortification with 10 m walls, 2.90 m thick, was erected even farther from the end of the peninsula. During the archeological excavations made in the 20th century, the remains of ancient and early Christian necropolises were discovered on Kaliakra.

In the 5-6th century, according to Hierocele, the fortress (now known as Accra Castellium or simply Accra-cape) gained the importance of a fortified nucleus against the oncoming barbarian tribes and was one of the 15 cities in the province of Scythia. In 513, a battle ensued between Kaliakra and the Byzantine emperor Anastasius I. The settlement and fortress developed in the following centuries, but according to some researchers in the 7th century a decline occurred because the Slavs and Proto-Bulgarians showed no interest in settling this place. In 10th century sources, the area is variously listed as Tetrasida, Tetrasiada, Tetrisias, Trisa, Tirisa, or Tirista.